Posted on February 10, 2016 by Catastrophe Jones

This is Issue #140 of DeathWatch, an ongoing Serial. Click that link to go find ‘DeathWatch’ then go to ‘#0 – A Beginning’ and read from there, or go find the issue # you remember, and catch up from there! 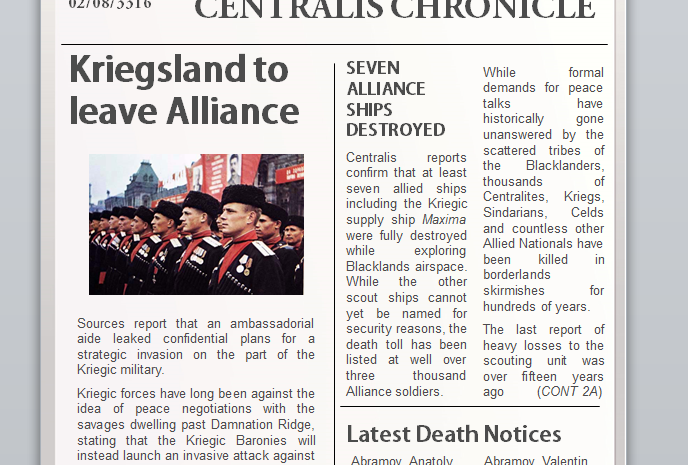 He felt his bowels run cold with terror, and he held the gun in his hands, staring down the dozens of pairs of eyes that looked up at him with fear and determination. He looked over at his comrade, who wore a similar expression as he shouted at them to move.

He, too, tried to usher the children away, but they wouldn’t leave; the temple was a safe place, a sacred place — but intelligence had promised that weapons were being held there. Weapons the like of which the Allied forces had never seen.

They had to be retrieved.

The children sang and prayed, and wouldn’t move.

Orders came in, over the comms.

Move forward. Get in. Get the weapon.

He walked, waded through the sea of children, and they reached up and hung off him, festooned him with flowers, kissed his hands, weighed him down. He couldn’t move forward without harming them — and they were children.

The orders came in, over the comms, again.

And finally, as Squadron 414 was nearly stopped by a temple full of innocent children, the orders were changed.

The soldiers looked at one another in faint confusion, but all it took was more time, more fear, and finally, with HQ screaming in his ears about a court martial, feeding him lies about what it was the Blacklander weapon would do, one of the men finally pulled the trigger.

Those first shots began a hailstorm, as soldiers flinched and shot in response, as fear and adrenaline took over.

Dozen and dozens of bodies littered the floor, pink and orange and saffron robes soaked in crimson, chains of flowers strewn everywhere.

The tip of his weapon was smoking; the barrel was hot.

What children were not dead would die soon.

Others had run, fleeing.

The path to the innermost chamber was clear, at last, and stumbling and scrambling over and past the bodies, the soldiers ran in — and found it empty but for a large fountain pool of blessed water. They stared at it, at how it shimmered with threads of a strange silverblue, and then had to retreat, empty-handed, escaping the temple to get back to their pickup spot.

That night, Alec Garrett woke to the sound of his roommate crying. John Ryan had fired first, finger pulling that trigger out of fear or exhaustion or fury, or who knows what — but it was his bullets that spurred the rest of the squadron into killing.

“I’m a monster,” the boy sobbed. He was, after all, merely a boy. They were both just boys. Children fighting an old man’s war.

Garrett got up and crawled into John Ryan’s bed, and pulled him into his arms. “Shh,” he pleaded. “Shh. It was quick. It was orders. You have to let it go,” he urged, though he knew in his heart he couldn’t let it go, either. He pet John’s hair and kissed his cheeks, like his mother did when he was young, and Ryan quieted, shifting enough to wrap his arms around Garrett, struggling for rest. When he seemed settled, Garrett carefully pulled away, to crawl back into his own bed.

Garrett relented, and held him until he felt himself begin to drowse, and then he simply had to let go — it would be no good to wake up in John’s bunk in the morning; infantry found guilty of immoral fraternization had two choices — they could be discharged without merit, or they could be sent to invasive tactics training, and put on ground missions in enemy territory until they died.

In his time as an infantryman, Garrett had seen more than a handful of men caught. In the end, most of them chose invasive tactics, though some denied the allegations, blaming the man they were with, implying some sort of force or unwilling seduction. He had decided, once he’d realized his feelings for John, to not act upon them, not open himself (or John) up to the horrors that would come with an investigation into their secret hearts — but John had confessed his desire boldly, and Garrett had been swept away by the idea of the affair. They’d been lovers for months, under the noses of their commanding officer, a fierce and notoriously bigoted Krieg who had been rumored to hunt the men that went AWOL from his units, and when he caught them, beat them to death.

With all those thoughts, Garrett crawled back into his own bed, and struggled to find sleep. He drifted off at some point. That he knows.

He curses himself for it, still.

No one knows what John Ryan was thinking when he woke up and found himself alone in bed. Was it still about the children? Was it how he couldn’t be comforted by his lover and friend when his heart was breaking?

All Garrett knows was that at some point, John Ryan cleaned and loaded his sidearm, crawled into Garrett’s bed, and curling up with him. Once settled in the crook of Garrett’s arm, John put the muzzle of his sidearm into his mouth, and pulled the trigger.

Alec Garrett woke with a start; adrenaline surged through him, and he lived in a moment of pure fear and shock, until the panic ebbed away. He gripped the edge of his desk, and the paper he’d been reading when he dozed off crinkled under his fingers. He stared down at the article and sighed, pinching the bridge of his nose, and cursed himself for getting involved in Kieron’s leaving. Likelihood said that now both boys would only be coming home draped in the Centralis Flag.

Wretched word-goblin with enough interests that they're not particularly awesome at any of them. Terrible self-esteem and yet prone to hilarious bouts of hubris. Full of the worst flavors of self-awareness. Owns far too many craft supplies. Will sing to you at the slightest provocation.
View all posts by Catastrophe Jones →
This entry was posted in Deathwatch, Fiction, Serial and tagged Academy, airships, article, Centralis, death, deathwatch, dreaming, fiction, Garrett, government, Jet, Kieron, love, news, news article, newspaper, nightmare, reading, serial, war, writing. Bookmark the permalink.

Go ahead -- say something. Anything. Cancel reply

This site uses Akismet to reduce spam. Learn how your comment data is processed.